Lauren Feringa is a veteran of the Army National Guard, advocate, and a breastfeeding mom. We heard about Lauren's story when she shared photos about the dramatic difference she felt immediately after receiving a Stellate Ganglion Block (SGB), a non-invasive treatment for PTSD. We reached out to her, and we are thrilled that she's chosen to share her story here. Follow Lauren on social media at A Hippie and A Veteran for more about her story and updates about pending legislation HR 5648 to make this treatment available to all veterans suffering from PTSD.

My first PTSD diagnosis was somewhere between 2010 and 2011 after my return from Iraq as a soldier and before I journeyed to Afghanistan as a contractor. I had just bought my first home, a month before my 24th birthday, utilizing my VA Loan. As a single brown female, it was one of my proudest achievements. I felt both power and privilege, like I was about to get to live the real American Dream. But something was off; my body and mind were buzzing and I couldn’t get comfortable. I felt like I didn’t belong, and I didn’t; traumatic experiences had conditioned me for a combat environment. I came home from Afghanistan for the last time in 2014, after my final overseas contract with the USO. If you’re wondering how I did this as a Guard member, I was able to extended my Guard contract and make up drills during by my volunteer time in clinics on the bases I supported.

I tried to settle myself back in, but after a month I was feeling that creeping veil again. I was self-medicating with lots of alcohol and tried to get in at the VA, but avoidance is an all too real symptom. Still in the Guard, I was able to balance my mind by working within the Washington State National Guard as a soldier and then also doing marketing work for nonprofits that supported the military, veterans, and military families. But I was still drinking heavily. I had tried many different mental health medications over the years and drinking was more controllable compared to the pills' lasting masking affects. I made the decision to incorporate cannabis, both THC and CBD, more frequently in an attempt to get off more toxic substances. I was successful - my nightmares were lessening. But I was still drinking. I decided to get out of the Guard in 2018 because I wanted to take a natural approach to my mental health.

The face of PTSD

I found out I was pregnant a little over a month after my discharge. I quit a 20-year smoking habit, said goodbye to my bottle a night, and cut everything that wasn’t healthy out of my life. I was going to give our baby the safest and healthiest home possible for the next eight months. I decided I wouldn’t take so much as a Tylenol unless it was medically necessary, and I stuck by it until I broke my arm a month before delivery. I can say that I felt the weight of suicide on my shoulder for most of my pregnancy, but thankfully I had an amazing partner that took care of my comfort and well-being. He was, and still is, the most perfect partner I could have ever imagined - if it wasn’t for such support, I definitely couldn’t have made it through. So breaking my arm definitely ramped up my issues. My panic attacks, which had been slowly climbing, became far more frequent. I blamed myself and

It was all worth it for this face!

didn’t trust myself for being in any situation that could cause harm. The birth was both beautiful and traumatic. I experienced panic attacks, paranoia, and flashbacks, but my birth coach (my partner who studied the Bradley book all throughout the pregnancy) helped to ground me with his belief in me. I definitely felt postpartum depression, and when I came out of it I literally woke up one day and felt so much lighter.

But the anxiety was still present and I couldn’t relax. It got to the point that I could hardly eat at all. Before I knew it, I was approaching 100 pounds, not just because I was breastfeeding but because my food intake wasn’t making up for that extra 30% of energy I was expelling. I dropped all but one class at the community college I had been attending because I had a hard time leaving the house. I had to force myself to go for a walk around the corner and started to become so paranoid that crossing the street terrified me.

Then a friend and Reiki practitioner sent me a link for the 60 Minutes episode highlighting Stellate Ganglion Block (SGB) as treatment for PTSD. At first I just read the article and I broke down crying. Like the people in the episode, I could say with absolute certainty that my fight or flight response was turned on and I couldn’t turn it off. I already had a scheduled appointment with the VA a couple days later so I was ecstatic to go in and ask for the treatment because I happened to be at the Long Beach VA, the very VA the episode had covered. But some things at the VA are far more difficult than they should be. I broke down and was honest with my doctors. I begged for an SGB, but of course they knew nothing about it. I went all over and called all over for a couple weeks, until I was able to jump through red tape and get to the SGB Research Office. They scheduled me for the first available appointment on July 16th, 2019, the 10-year anniversary of my first loss overseas. It was like divine timing, as if the universe had set me up for prime emotional release.

Image of Stellate Ganglion Block injection into the neck

As far as I know, I’m the first lactating parent to undergo this treatment. I was initially worried about not being able to breastfeed, but luckily there was absolutely no risk to the health of my son as it’s only a local anesthetic (lidocaine and marcaine) into a little nerve cluster on the side of your neck. It’s also temporary, so if it didn’t work I figured no harm no foul. But if it worked like had heard, it was worth a try. The weekend before my first injection I recorded a 30-minute monologue of my PTSD experience as I was experiencing it. I really felt like once that shot hit, life would never be the same. I wanted to honor the woman who had gotten me to this point in spite of mental pain she faced, and recording and photographing seemed like the best way. I also recorded a video of the injection itself.

July 16th came; my aunt brought me and held my son outside in the waiting area as I experienced the single greatest relief of my life. The lights got brighter and my eyes were no longer vibrating. I had immediate relief in my neck that I had been obsessively cracking for a decade. I tried to think of the words that had scrolled across my mind day in and day out, “I want to kill my self.” I couldn’t even finish that sentence in my mind. Chronic pains I didn’t know were associated with my PTSD were immediately relieved.

Possibly the first ever lactating patient to receive SGB

Then I got to go out and hold my son. He was already everything in the world to me, but somehow seeing him without all the fear and darkness illuminated him even brighter. It was like seeing him through my eyes without a heavy weighted veil in between us for the first time. It was the first time I alone, Lauren sans PTSD, held my child. I would go through any obstacle, face any person, human or divine, for that one moment. I now get to see him through those eyes every day thanks to Stellate Ganglion Blocks.

In my opinion, it is the safest and most effective approach to treating PTSD because it targets the cause, not the symptoms. More importantly, it’s an easy and safe treatment for breastfeeding mothers suffering from PTSD, a demographic very much in need of relief. 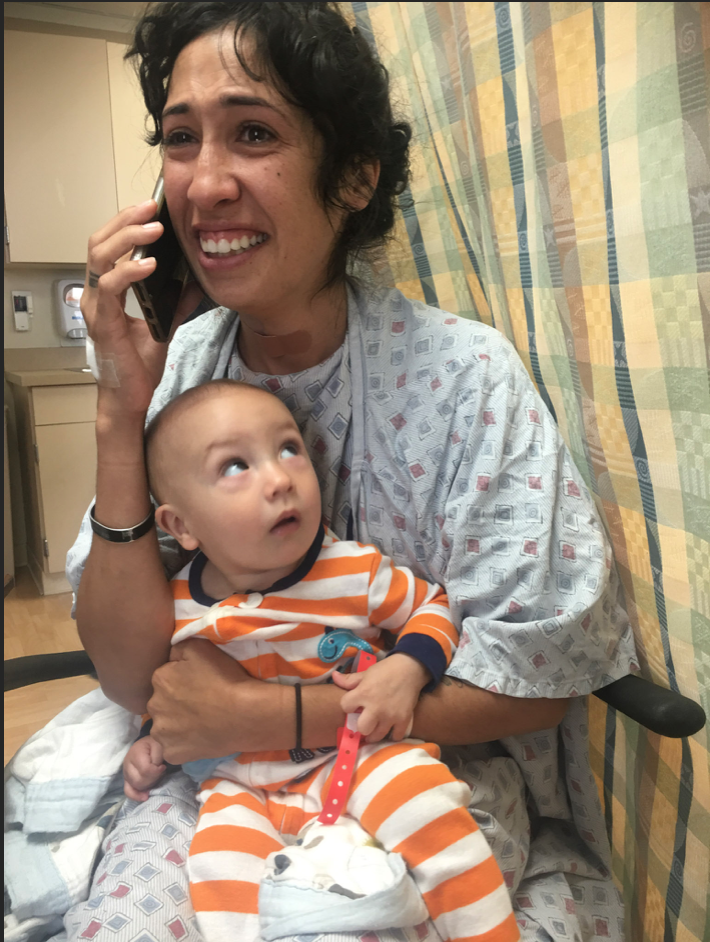 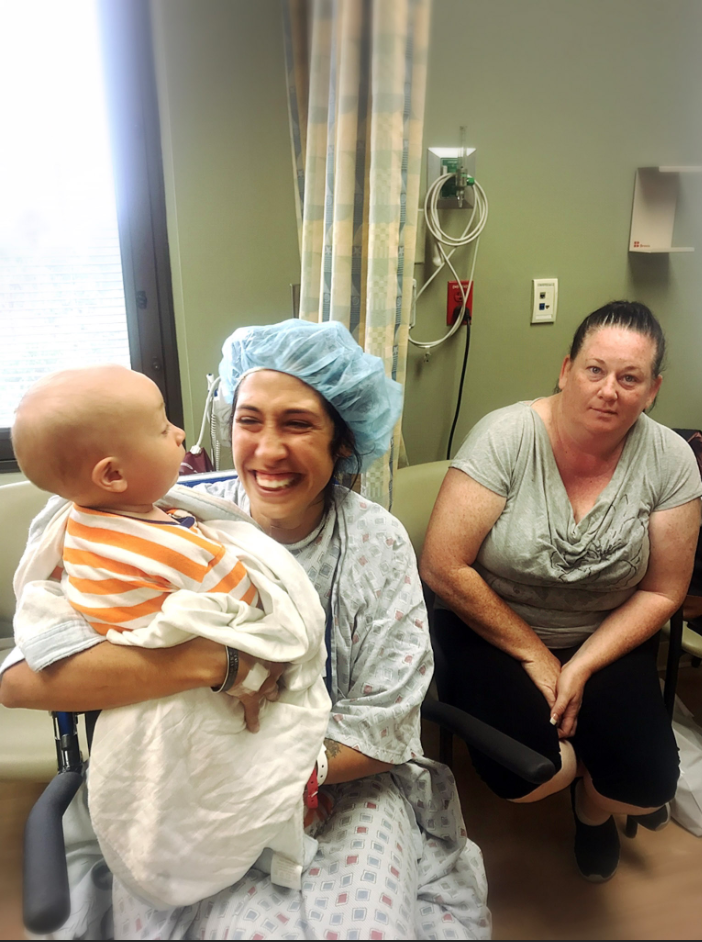 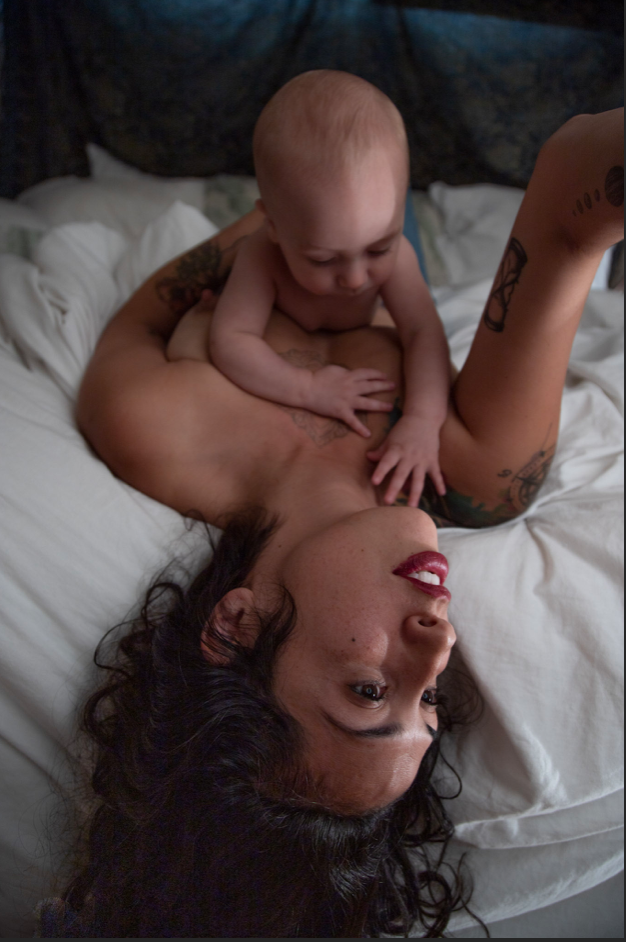 I am no longer at the Long Beach VA and am paying out of pocket for my injections, like many other veterans. They cost about $750 for a single injection, so we save up and I get them when we can afford them. However, they are available in pilot/research programs at a few VAs and military installations. If interested, your best bet is going through your mental health provider. Thankfully there is SGB legislation being presented to the House in the coming months, H. R. 5648, the Treat PTSD Act which will approve these injections nationwide for all of our veterans. We have the chance to really give our strongest fighters the relief they deserve. This summer I will personally be joining them and advocating as a patient, as a veteran, as a mom, and as a very dedicated breastfeeder.

Lauren Feringa is a veteran of the Army National Guard, a breastfeeding mom, and one half of the social media travel site Hippie and A Veteran. She is an advocate for veterans who suffer from PTSD.

#COVID19 and Breastfeeding: The Basics